The Dubai Metro loads up with Hillstone 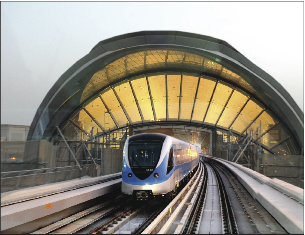 In a major contract Hillstone Products Ltd recently provided loadbanks for
the autonomous testing of the UPS systems installed by the Dubai Metro, a
driverless, fully-automated Metro network in the United Arab Emirates
city of Dubai in the UAE. WIP has the story.

The Dubai Metro, a driverless, fully- automated Metro network in the United Arab Emirates city of Dubai in the UAE, has already carried approximately 20 million passengers since it opened in 2009.
Hillstone reports that 200kW and 300kW AC units along with 120V DC load banks were supplied for autonomy load testing and battery capacity testing by the Metro.

Paul Smethurst, MD of Hillstone, told MEP: “Since 2008 Hillstone have successfully operated a specialised Load Bank Rental Service from Dubai covering the whole Middle East region.”
Hillstone’s Load Bank Fleet contains an extensive range of both AC and DC units. The DC load banks are said to be very portable and allow for ease of movement to the battery or UPS room by one man.  The AC load banks are designed with a small footprint and can deliver high power ratings with the use of the intelligent parallel hand held controller.

A cornerstone of the successful rental service is the technical support given by the UK engineering department, says the company. Every enquiry is fully supported to ensure the UAE sales team can provide the highest engineering standard and solution to the customer.
Part of the technical discussions for DC load banks requirements often starts with the need to established the type, size and capacity of the battery to allow selection of a suitable load bank, says Paul.
“Our customers get the reassurance from our extensive experience of UK engineering standards to ensure the load bank package suits the commissioning needs” Paul reports.

“Our DC load banks are used for commissioning testing for both Ni-Cad and Lead Acid batteries used on telecom and UPS standby systems. With ratings available from 12V to 600V and allowing discharge testing from 50A to over 4000A, we can satisfy most requirements across the Middle East,” says Paul.
All the specialist equipment has been designed and manufactured by Hillstone in the UK and regular additions to the fleet are introduced.

The Middle East fleet includes AC load banks of both single-phase and 3-phase designs with portable equipment rated from 14KW 240V single phase. Larger 3 - phase designs include 100KW, 200KW, 300KW, 500KW and 650KW load banks, with total power availability of over 3000KW when the units are linked together.

One recent project involved the supply of 650KW load banks to Qatar Gas for the Dubai-based oil rig manufacturer J Ray McDermott. A load bank was required for the commissioning & testing of the platform’s electrical power system during production in Dubai and also during the rig transfer to Qatar.

Hillstone has expansion plans for 2011 which include the opening of a new rental depot in the Kingdom of Saudi Arabia. “This is a very exciting opportunity with the introduction of a depot inside the Kingdom allowing for an enhanced service to customers and an opportunity to overcome the importing and re export costs presently experienced,” Paul concludes.

Posted by Hillstone Load Banks at 12:02